Defoliators (an adult or larval insect) eat or destroy the leaves or foliage off of trees and shrubs most commonly in two phases, early season (early spring to summer) and late season (later summer to fall.) 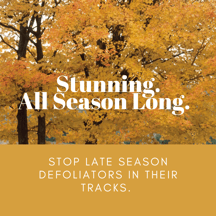 Early season defoliators typically cause the most damage. In the regular cycle of a tree, leaf development is fueled by carbohydrates, produced during photosynthesis. Each year these reserves or carbohydrates are replenished when new leaves emerge. When an adult or larval insect attacks the canopy of a tree, the tree then has to make a new set of leaves. Depleting the trees “reserves.” In high infestations, defoliation may cause loss of most or all of the foliage and thus stunt the growth of trees, due to the under supplied levels of carbohydrates. This type of early defoliation causes serious havoc on tree health and can lead to decline and even death.

We'll keep your trees stunning all season long. Make an appointment with our certified arborists today.