Every Rose Has Its Thorn - and Its Japanese Beetles

What's metallic, has six legs, and is ruining your prized roses? You guessed it - the Japanese beetle. These insects have been plaguing gardens around the country since the early 1900s, and they're back for more this summer.

3 things you should know about Japanese beetles

Japanese beetles make meals of more than 400 plant species, including rose bushes, crape myrtles, and Japanese maples (go figure). Swarms of these half-inch long beetles will eat the tissue between leaf veins, skeletonizing your leaves. But don't think they'll ignore the flowers and fruit of your trees and bushes - Japanese beetles are happy to feast on those, too.

There are three aspects of Japanese beetles in particular that make them such an annoyance: 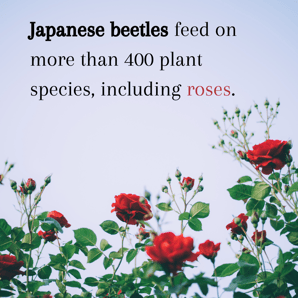 As if brown spots in your lawn isn't enough, large grub populations can also attract predators like skunks and raccoons that may dig up your turf looking for a meal.

Although Japanese beetles can ruin the look of your trees and shrubs, they rarely kill them. But they may weaken your plants over time, making them prone to secondary pest infestations or diseases.

You can't post gorgeous pictures of your crape myrtle or rose bush with those pesky metallic beetles hogging the spotlight, so what can you do to get rid of them?

If you're looking for a free Japanese beetle control solution, you can always just knock the beetles off your plants and into a bucket of soapy water. This solution is most effective early in the season when you first catch sight of the beetles. That way, they won't get a chance to send out signals to other beetles that your garden is a good place to eat. Japanese beetles aren't as active in the early morning or late evening, so knock them off then.

If you'd rather let the pros handle it, Carolina Tree Care has you covered. Our state-licensed applicators can use professional-grade products to lower the population in your yard. Depending on your situation and the time of year, we may apply foliar spray, soil-injection, and/or basal bark spray treatments.

It's time to end the reign of those small shiny beetles. Get in touch with us today to discuss your options.