One of the top reasons to cut down a tree is because it's either dead or dying. No one wants a tree to fall and damage their property, and sometimes the risk just isn't worth it.

Wood decay fungi cause wood rot that weakens trees and can lead to tree failure, and many times they produce fruiting bodies in the form of mushrooms or conks to let you know they're present. But does seeing any type of mushroom or conk on or near your tree mean it has to come down? Maybe not.

First things first — not all fungi are harmful. In fact, some fungi are actually good for your trees.

Fungi can have three types of relationships with trees: symbiotic, saprophytic, and parasitic. Symbiotic fungi form a mutually beneficial relationship with their host trees. The fungus will settle down in the roots of the tree and make the tree's moisture and nutrient absorption capabilities better. Meanwhile, the fungus gets a share of the carbohydrates the tree makes through photosynthesis. It's a win-win.

You might already know one type of symbiotic fungus called the fly agaric. It produces mushrooms with red caps and white spots, like the kind you may recognize if you've ever played the Mario video game series. Fly agaric grows near the roots of birch and pine trees and shields them from parasitic species. Talk about a power boost!

Saprophytic fungi are the ones that process dead and decaying organic matter. It's not unusual to find their mushrooms or conks on stumps and piles of woodchips, hard at work with their decomposing duties. We'll put these fungi in the friendly category since they're just doing their jobs, but they are common signifiers that your tree is in decline.

Some types of fungi don't have the patience to wait for a tree to start dying before it feeds. These parasitic wood decay fungi will infect live trees at their weak points — any type of wound that exposes inner tree tissue.

Wood decay fungi release chemicals that lead to wood rot, which can weaken the compressive strength and/or bending strength of your tree. Since these fungi attack trees beneath the surface (either inside the tree or underground), sometimes the only way to know your tree is infected is when a limb snaps off or the entire tree fails in a storm.

Other times, you'll see signs of wood decay fungi, which can include:

And of course, mushrooms and conks are a common sign that a wood decay fungus is present in a tree.

So, which mushrooms and conks should you look out for? Well, there are four types of wood decay fungi you'll see in the Charlotte, NC area: 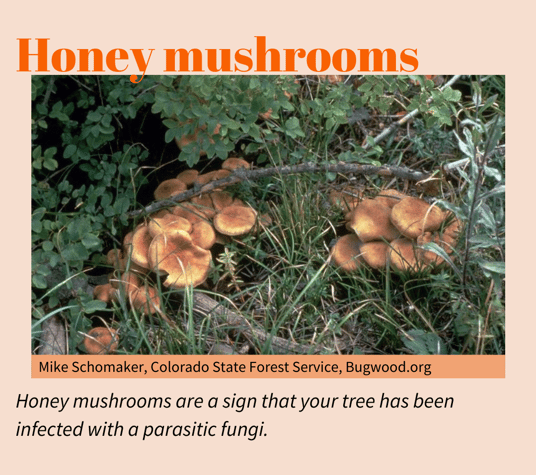 If you think you can get rid of fungal infections by pulling out the mushrooms or conks, think again. Mushrooms and conks are just the fruiting body of the fungus, like the flower of a plant. The rest of the fungus can run all throughout a tree's bark and sapwood.

The fungi mentioned above don't always produce fruiting bodies, but if you've seen mushrooms or conks growing on or near your tree, or you've noticed other signs of a fungal infection, call in the professionals. The experts at Carolina Tree Care can identify the fungus, let you know if you should be worried, and recommend the best actions to take.

We may recommend fungicide treatments. Taking measures to enhance the general health of your tree can help, too. We're talking making sure the tree is adequately watered, decreasing soil compaction, mulching, fertilizing, and addressing any root issues, to name a few. That way, your tree can increase its own defenses.

Worried about the mushrooms or conks you're seeing around your tree? Let our pros ease your mind. Request a consultation today!