During the fall, and maybe a few times this winter, you may have seen small, dark green beetles in your home. If what you saw were elm leaf beetles, you may see the same bugs in your trees this spring.

What are elm leaf beetles?

Elm leaf beetles were introduced to the U.S. from Europe in 1838. They're found all over the country.

Elm leaf beetle damage is easy to see on landscape elm and zelkova trees. As larvae, these insects skeletonize leaves, meaning they eat the tissue between the veins of the leaves. This feeding damage makes the leaves look lacy and see-through.

Eventually, the damaged leaves will turn brown and fall off the tree. 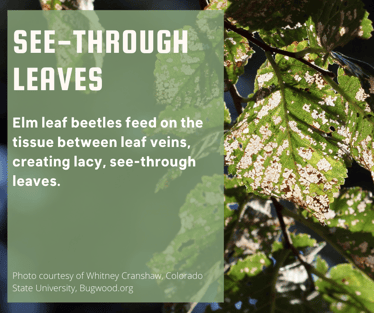 Adult elm leaf beetles also get their nutrients from leaves. Instead of skeletonizing them, adult beetles just chew right through leaves, leaving irregularly round holes.

Elm leaf beetles overwinter in tree bark crevices, woodpiles, and yes, homes and other buildings. That's why you may have seen the green bugs in your home during the fall.

Fortunately, elm leaf beetles don't feed or reproduce while overwintering, so you don't have to worry about damage to your home. If still alive when spring starts, they'll make their way back outside to your tree.

The bugs you may have seen in your home will look a little different from the ones you see in your tree in the springtime. While in their semi-dormant, overwintering state, they're a dark green color. They'll usually turn more of a yellow-green color when they start eating again in the spring.

Female elm leaf beetles start laying eggs soon after spring begins. You may see their yellow eggs on the underside of your elm or zelkova tree's leaves. 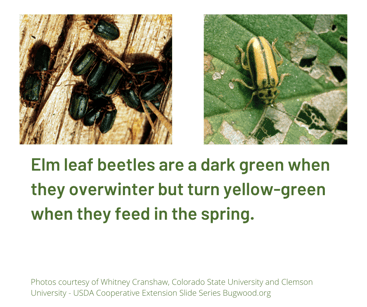 Why worry about elm leaf beetles?

Elm leaf beetles are considered one of the most serious elm defoliators in the country. In the Charlotte, NC area, three or four generations of elm leaf beetle can be observed on elm trees per year, which can lead to a lot of damage.

A healthy tree can handle minor defoliation, especially if it happens later in the season after a tree has already made and stored most of its food.

But substantial, repeated defoliation, particularly when it happens early in the season, can lead to reduced growth and vigor. This is because a tree can't make all of the food it needs through photosynthesis if it loses its leaves too early.

Defoliation also takes away a tree's ability to provide shade and diminishes its beauty.

Protect the elms and zelkovas in your Charlotte, NC yard this spring

What hope do we have against these leaf-eating insects? Elm leaf beetles do have a few natural enemies, including predaceous stink bugs, plant bugs, and parasitic wasps. Elm leaf beetles don't do well in the cold, either — many of them die during long winters and late spring freezes. And small elm leaf beetle larvae can get blown away during windstorms.

If Mother Nature isn't cutting it, we can help. We can treat your elm or zelkova tree with soil injections starting in March and/or foliar sprays starting in May.

Spring and summer are busy times of year for plant health care treatments, so do yourself a favor by scheduling your treatment early. Request a consultation today!

Then you'll love this: Got Fall Webworms? Worry No More.