3 Reasons Why You Shouldn't Be Topping Your Crape Myrtle

Your crape myrtle is the crown jewel of your landscape in Concord, NC. Its white, pink, or purple blooms are a sight to behold in the spring. But over the years, your precious crape myrtle has grown a bit big for its space. It may be time for some pruning.

Topping, one of a few ways you can prune crape myrtles, is generally frowned upon in the tree care industry. In fact, topping is often called crape murder! (Cue the dramatic music.)

Why is topping so bad for crape myrtles? We're giving you the top three reasons in this post! 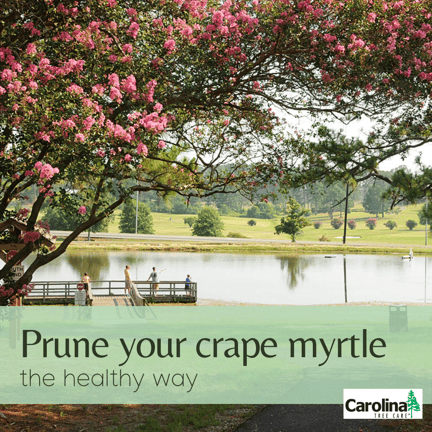 At one time, topping was a common pruning method for crape myrtles. Topping, also known as heading, stubbing, rounding, and dehorning, is the drastic removal of a tree's canopy using improper cuts that ruin a tree's shape and health.

When a tree is topped, its branches are cut between internodes instead of where branches naturally meet.

According to the International Society of Arboriculture, topping is not an acceptable pruning technique, with very few exceptions.

Let's get to those 3 reasons

Calling it "crape murder" may seem dramatic, but topping your crape myrtle can lead to some serious issues: 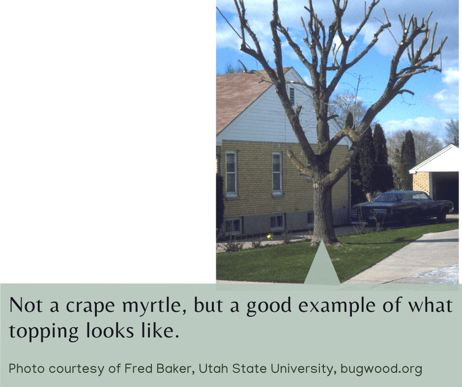 Instead of topping your crape myrtle, opt for this technique

Ideally, the way to avoid the need for frequent or aggressive crape myrtle pruning is to plant the right tree in the right place. In other words, pick a cultivar (short for cultivated variety) that will grow to an appropriate size for your chosen location.

But it may be too late for all of that. You may need to prune your crape myrtle to keep it from growing into nearby structures or power lines. We get it.

We recommend a pruning technique called pollarding to get the crown of your crape myrtle under control.

Pollarding is a multi-year process. Initially, it involves removing a significant amount of foliage by pruning back to large-diameter branches.

Most of the sprouts that regrow are removed every year or two, but several key sprouts are left alone to thrive. This promotes the growth of a dense head of foliage and branches called a pollard head.

In subsequent years, small cuts back to the pollard head are all that will be needed. Because the cuts are smaller than they would be with topping, the wounds heal faster, reducing the chance for opportunistic insects and wood-decay fungi to cause issues.

Pollarding makes it easy to keep your tree at the exact same height year after year.

Pollarding can be paired with plant growth regulator for even better growth control.

It's prime pruning season here in the Concord, NC area, so don't wait to talk to us about pruning your crape myrtles in a healthy way.

Don't risk crape murder! Request a consultation with one of our pros now.

Then you'll love this: New Pest to the Southeastern US: Crape Myrtle Bark Scale